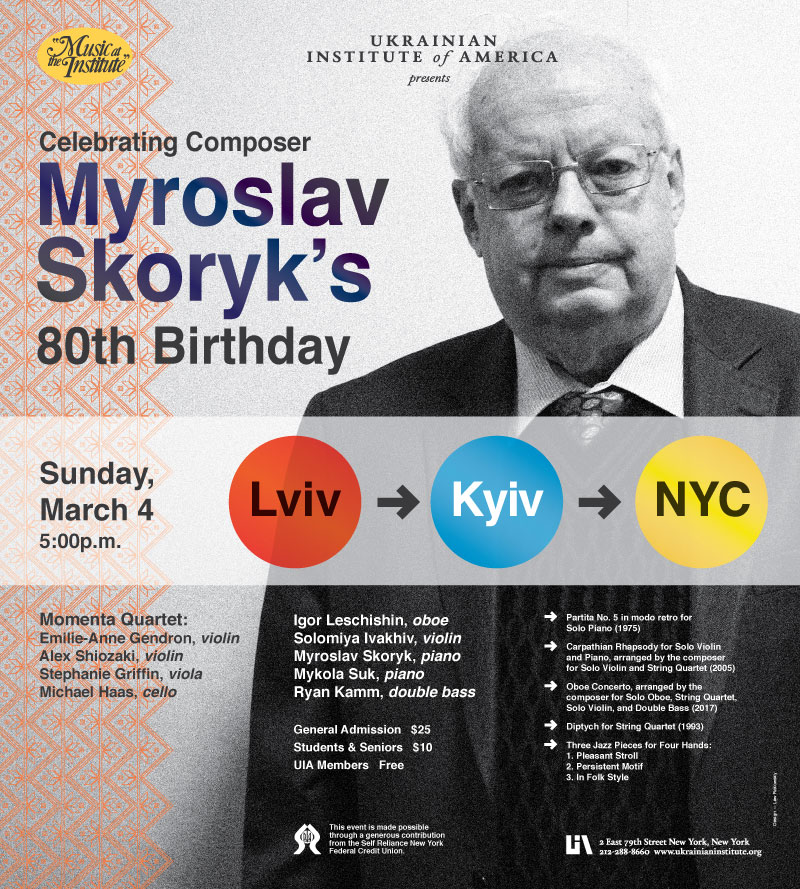 The author of a very diverse and impressive oeuvre, Myroslav Skoryk is one of Ukraine’s most prominent composers. Although contemporary in its vocabulary and means of expression, his music often draws from the rich well of Ukrainian folklore. Skoryk seldom quotes themes literally, but rather incorporates them organically into his works, thus synthesizing idiomatic folk rhythms and melodic gestures with the idiosyncracies of his personal style.

Skoryk’s works include the opera Moses (based on the poem by Ivan Franko), the ballet scores Solomiya Krushelnytska, The Return of Butterfly, Stonecutters; the symphonic Waltz; the symphonic poem Stronger than Death; Hutsul Triptych (based on his film score to Serhii Paradzhanov’s Shadows of Forgotten Ancestors); Carpathian Concerto (awarded first prize at the 1991 Kyiv Composition Competition); the symphonic work 1933 commemorating the Holodomor; Penitential Psalm in honor of the “Heavenly Hundred” (the protesters killed by snipers during the Ukrainian Revolution of Dignity in February 2014); and cantatas for voice and orchestra (Spring, The Person, and Hamaliia). He has also written 9 concertos for violin, 3 concertos for piano, 2 concertos for cello, and one concerto for viola; Suite and Partita for string orchestra, Partita II for chamber orchestra, some 40 film scores and nearly 30 works of music for theater. He also writes jazz and popular music.

Skoryk’s works are regularly performed throughout Ukraine, Germany, France, Austria, the Netherlands, Bulgaria, the Czech Republic, Slovakia, Poland, Great Britain, as well as Canada, the United States, and Australia. He often performs his own works as conductor and pianist.

Born in Lviv, Ukraine, in 1938, Skoryk, whose exceptional musical talent was recognized in his childhood by his great aunt, the famous opera singer Solomiya Krushelnytska, was enrolled in the Lviv Music School in 1945. However, his education was interrupted in 1947, when the Skoryk family was arrested by the Soviet authorities and exiled to Sibera. Skoryk was allowed to return to Lviv only in 1955, after the death of Stalin. He was then accepted to the Lviv Conservatory, where he studied composition with Stanyslav Lyudkevych, Roman Simovych, and Adam Soltys. Graduating in 1960, his diploma work was the cantata Spring to the words of Ivan Franko, which is still being performed to critical acclaim. From 1960 to 1964, Skoryk studied at the Moscow Conservatory in the doctoral program with the celebrated Dmitri Kabalevsky. While there, he drew the attention of Dmitri Shostakovych, whose interest in the young Skoryk’s works, expressed in one of the famous Russian composer’s letters to him, added to his creative confidence. Upon graduation, he joined the faculty of the theory of music and composition at the Lviv Conservatory and, in 1966, the faculty of the Kyiv Conservatory. He continues to teach at the Kyiv Conservatory, and also heads the composition department at the Lviv Conservatory.

In 1968, Skoryk became secretary of the Ukrainian Union of Composers and, in 1988, head of the Lviv branch of this organization. He is the winner of the prestigious Shevchenko Prize (1987), holds the titles of Hero of Ukraine and People’s Artist of Ukraine, and in 1998 was awarded the Ukrainian President’s Order of Merit. He is the honorary head of the National Union of Composers of Ukraine.

Myroslav Skoryk is also a respected musicologist, specializing in contemporary music. He is the author of numerous articles and two books, The Modal System of Prokofiev (1969) and The Structural and Expressive Aspects of Chords in 20th Century Music (1983). As part of his interest in the preservation and revival of Ukrainian music, in the spring of 1991 Skoryk organized a festival of works by Ukrainian composers living abroad. He is also the founder of the International Festival of Contemporary Music “Contrasts,” heads juries of international performing competitions, and since 2002 has been artistic head of the Kyiv Music Fest International Festival. Since 2011, he has been artistic director of the National Opera of Ukraine.