The Ukrainian Institute of America is pleased to collaborate with the Shevchenko Scientific Society in the US to present pianist, Pavlo Gintov, who will perform works by Serhiy Bortkevych, an oft-overlooked Ukrainian composer. During his life, Bortkevych (also spelled “Bortkiewicz”) was oppressed and persecuted by both the Soviet and Nazi regimes. A brilliant pianist and composer, he was a refugee and a survivor of two world wars. The style of Bortkevych’s music derives from the great Romantic composers of the 19th century. He adopted Liszt’s rich and brilliant piano writing, Chopin’s lyricism and humanness, the imagery of Schumann’s character pieces, and Wagner’s imaginative harmony. This concert is part of the Music at the Institute’s 2020/2021 season.

In-Person Experience
This exclusive in-person event is limited to ten (10) people in order to comply with current COVID-19 guidelines. The Ukrainian Institute of America respectfully requests that each in-person guest submit a signed “Waiver/Release & Agreement” prior to the start of the event. We appreciate your understanding and your compliance with this requirement.
Buy Tickets

Livestreaming Experience
Watch this concert from the comfort of your own home.
Buy Tickets 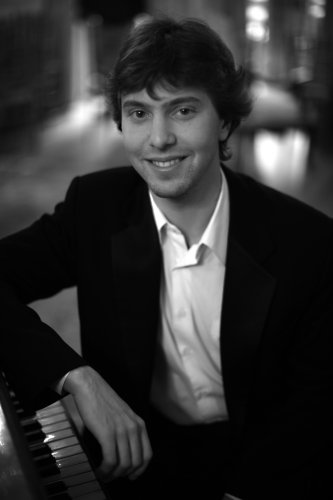 Pianist Pavlo Gintov has been described as “a poet of the keyboard” by Marty Lash of the Illinois Entertainer, a “musical storyteller” by the Japanese publication Shikoku News, and “a fantastic pianist and extraordinary artist” by Jerry Dubins of Fanfare Magazine.

Following his debut at Kyiv Philharmonic Hall at the age of 12, where he performed Mozart’s Concerto in D minor K 466 with the Kyiv Chamber Orchestra under the baton of Roman Kofman, Mr. Gintov has been touring throughout Europe, Asia, Africa and the United States, appearing on such stages as Carnegie Hall in New York, Berlin Philharmonic Hall, Teatro Verdi Nationale in Milan, the Great Hall of Moscow Conservatory and Kioi Hall in Tokyo. He has been a soloist with the Tokyo Royal Chamber Orchestra, the National Symphony Orchestra of Ukraine, Shizuoka Symphony Orchestra, Orchestra Ensemble Kanazawa, the National Symphony Orchestra of the Dominican Republic and Manhattan Chamber Orchestra under conductors such as Michiyoshi Inoue, Victor Yampolsky, Thomas Sanderling, Volodymyr Sirenko and Tomomi Nishimoto. Mr. Gintov has appeared on WFMT radio in Chicago, WCLV of Cleveland, France Musique, as well as numerous radio and TV stations in Europe, Japan, and the USA.

Mr. Gintov graduated with honors from the Moscow State Conservatory, where he was a student of Lev Naumov and Daniil Kopylov. He holds a Doctor of Musical Art degree from the Manhattan School of Music in New York City, where he studied with Nina Svetlanova.

Co-sponsored by the Shevchenko Scientific Society in the US.