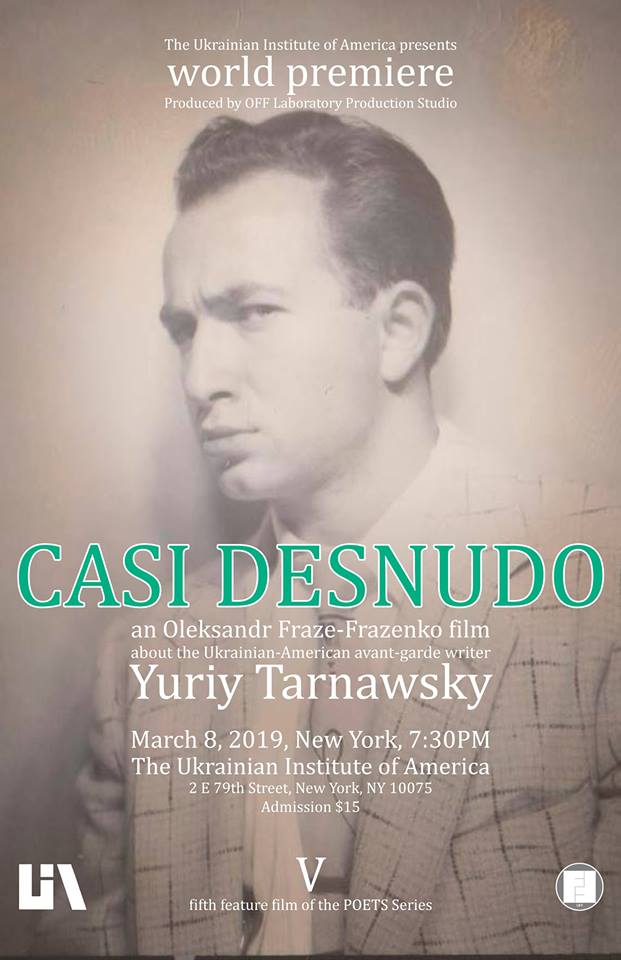 The screening of Oleksandr Fraze-Frazenko’s Casi Desnudo, a film about the Ukrainian-American avant-garde writer Yuriy Tarnawsky, will be followed by Mr. Tarnawsky’s reading from his newly-released books (Warm Arctic Nights, The Iguanas of Heat, Literary Yoga). He will be introduced by Prof. Maria Grazia Bartolini from University of Milan.

Yuriy Tarnawsky is a bilingual Ukrainian/English author of some three dozen books.  His Ukrainian language books include two volumes of collected poetry Poems About Nothing and Other Poems on the Same Subject and They Don’t Exist, a hexalogy of plays patterned on Greek tragedy 6×0, a book of selected prose I don’t Know, and a book of selected essays Flowers for the Patient.  His English language books include the novels Meningitis, Three Blondes and Death, The Placebo Effect Trilogy, Warm Arctic Nights, and The Iguanas of Heat, the collections of short fictions Short Tails and Crocodile Smiles, a book of Heuristic Poetry Modus Tollens/Improvised Poetic Devices, a collection of selected essays and interviews Claim to Oblivion, and a book of literary exercises Literary Yoga. An engineer and linguist by training, he has worked as computer scientist at IBM Corporation and professor of Ukrainian literature and culture at Columbia University. For his contribution to Ukrainian literature he was awarded the order of merit of Prince Yaroslav the Wise by Ukrainian government.

Oleksandr Fraze-Frazenko is a filmmaker, poet, photographer, translator, musician, co-founder of the “OFF Laboratory” production studio. Born in Lviv, Ukraine, Oleksandr is known for his feature documentaries about Ukrainian artists and poets (Chubai in 2014, The House on Seven Winds in 2015, An Aquarium in the Sea in 2016, Mister Nobody in 2017). His oeuvre includes several hundred films and videos. He is also involved in producing commercial advertising and music videos. His first feature film Don’t Lie To Me was premiered in 2016 at Wiz-Art Lviv International Short Film Festival. Oleksandr has authored ten books of poetry; they are collected in the volume Decadence (2017). He is the first to have translated Jim Morrison’s poetry into Ukrainian and published it in 2013. He has also translated English poetry of the Restoration Period, including works of John Rochester. Oleksandr is a performing artist and plays improvisational music and indie-rock. His discography consists of more than 50 albums.

Maria Grazia Bartolini is Assistant Professor of Ukrainian Literature and Medieval Slavic Studies at the University of Milan. Her research specializations include early modern Ukrainian literature, 20th-century Ukrainian poetry, and Baroque visual and religious culture.She is the author of Piznai samoho sebe. Neoplatonychni dzherela v tvorchosti H. S. Skovoroda (Kyiv 2017), In the Tight Triangle of the Night. The Poetry of Yurii Tarnawsky and the New York Group of Poets (Rome, 2012), and many articles in scholarly journals. In 2017, her article “Judging a book by its cover. Meditation, Memory, and Invention in 17th-century Ukrainian Title Pages” (Canadian Slavonic Papers, 59, 2017) has been awarded the Early Slavic Studies Association Best Article Prize.