Koliada and Music from the Carpathians 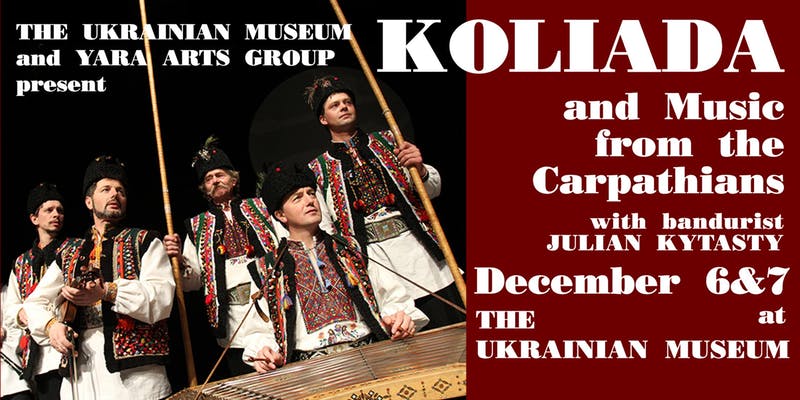 Yara Arts Group, under the direction of Virlana Tkacz, will stage a concert-theater event, “Koliada and Music from the Carpathians,” December 6 and 7 at 7:00 PM at The Ukrainian Museum, 222 E 6th Street in Manhattan. The Koliadnyky, an ensemble of winter song singers from the Carpathians, will sing traditional winter songs and perform brilliant troista instrumental music from the villages of Kryvorivnia and Verkhovyna. The evening will include a musical performance by special guest bandurist Julian Kytasty.

This evening, directed by Yara’s Artistic Director Virlana Tkacz, celebrates Koliada, a winter ritual that now coincides with Christmas but is much older in origin and symbolism. Its oldest songs are preserved in villages high in the Carpathian Mountains, where the ritual is considered to be the most important event of the year. Some people believe that spring and the harvest will not come to the village unless the songs are sung in every household. Its songs are incantations that assume the magical power of words: “what is said, will be so.”

The evening will feature a variety of unique instruments played by musicians of the Koliadnyky who are expert in this genre. Trembita is a Carpathian mountain horn made of a hollowed pine tree that has been struck by lightning and wrapped in birch bark. In the villages they are only used during the Koliada and at funerals. The fiddle is played in the Carpathian style. The musicians also play duda, a bag pipe made from a goat, and tsymbaly, a hammer dulcimer, and a variety of hand-made Carpathian flutes including the tylynka.

The Koliadnyky is comprised of both elders and younger musicians from the Carpathians.

Ivan Zelenchuk, is the lead singer or bereza of the Koliadnyky. Now in his sixties, he is the son of the man whose handwritten notebook of winter songs helped to preserve this tradition despite persecution under Soviet rule. Zelenchuk considers the Koliada his personal mission. He met the members of Yara Arts Group when they first visited his village, Kryvorivnia, in 2002 and has worked with them ever since.

Mykola Ilyuk is a master fiddler and plays most traditional instruments. He has his own museum of musical instruments from the area. He was the master fiddler for Yara’s “Winter Sun,” “Midwinter Night” and “Winter Light” as well as its Koliada events in 2010-2018.

Vasyl Tymchuk plays the tsymbaly (hammer dulcimer) and teaches children to play Hutsul instruments. He has worked with Yara since 2010.

Ostap Kostyuk plays the duda (bagpipes) and various flutes. He represents the newest generation that has become expert in this ancient tradition and was featured in Yara’s shows in New York, Toronto and San Francisco.

Yara Arts Group has produced a CD, “Koliada: Winter Songs and Music from the Carpathians.” For a sample with photographs visit https://www.youtube.com/watch?v=vRNaaAt_c0A.

Director of the evening, Virlana Tkacz, is founding director of Yara Arts Group, a resident company at La MaMa in New York. Since 1990, she has created 35 original theater pieces that fuse fragments of poetry, songs, legends and history from the East to create imagistic productions with narrative. She has collaborated with traditional musicians from Ukraine, Siberia and Kyrgyzstan and has written “Still the River Flows: Winter Solstice and Christmas Rituals in a Carpathian Village,” a bilingual (English-Ukrainian) publication that lovingly documents the winter Koliada ritual as practiced by Hutsuls in the Carpathian Mountains. Info: www.yaraartsgroup.net/still-the-river-flows. Born in Newark, Ms. Tkacz was educated at Bennington College and Columbia University and lives in New York City. Yara Arts Group is presenting its 30th Season at La MaMa and will perform two other events there in December.

These events are supported by public funds from the New York State Council on the Arts, New York City Department of Cultural Affairs in partnership with the City Council and grants from the New York Self-Reliance Foundation, MEEST and the friends of Yara Arts Group.

Koliada and Music from the Carpathians
+ Google Calendar+ iCal Export