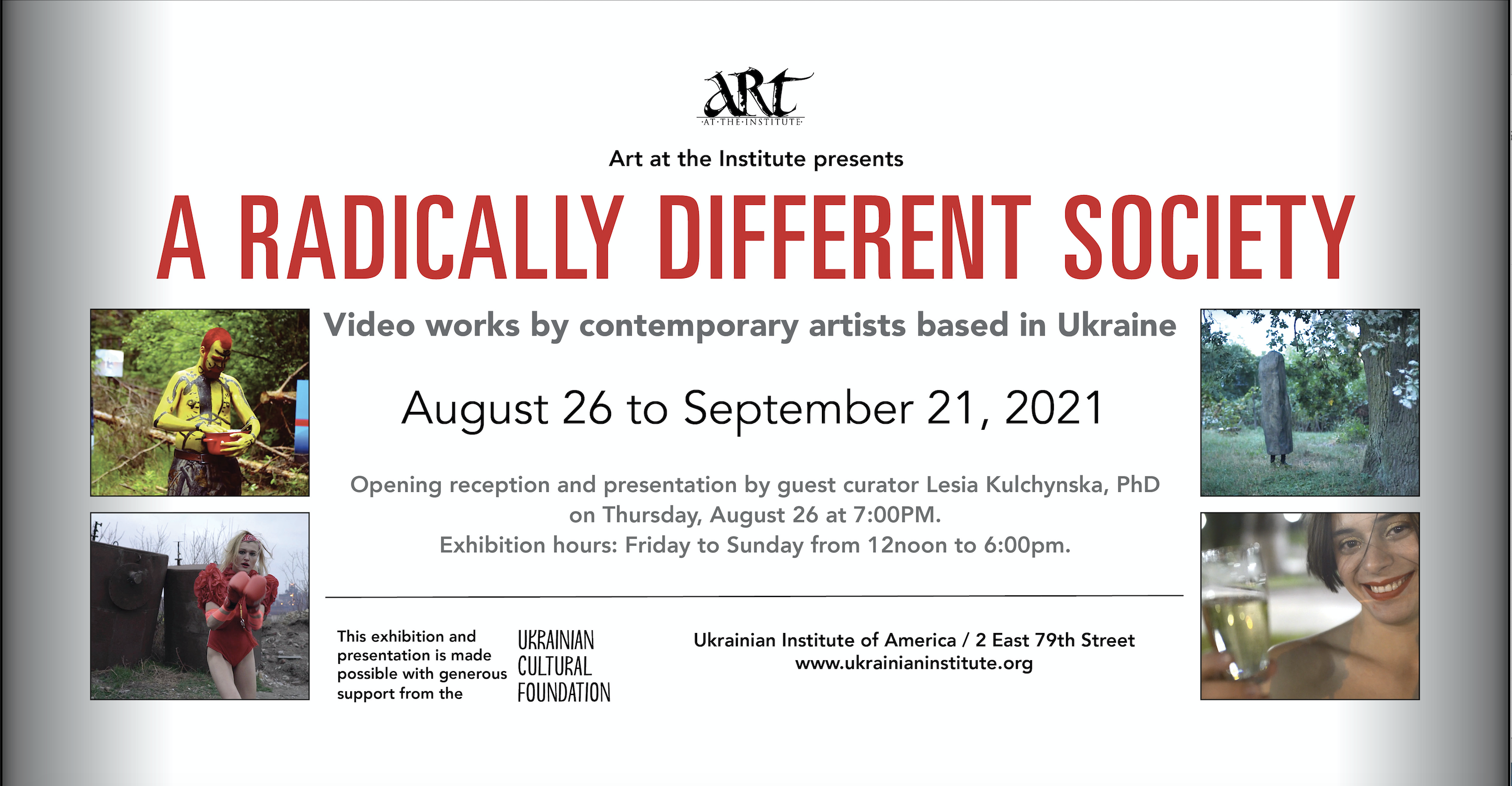 PHOTOS FROM THE OPENING.

In order to comply with the most current COVID health and safety guidelines, we will ask for proof of vaccination.

This exhibition and presentation is made possible with generous support from the Ukrainian Cultural Foundation / Український культурний фонд.

An exhibition/screening presented by guest curator Lesia Kulchynska, PhD of video works created by artists based in Ukraine during the years spanning Euromaidan and the war in Donbas, capturing Ukrainian society through a dramatic period in its history, yet the focus is not on concrete historical events. Instead, the space in the videos resemble the space of dreamscapes. Viewers encounter slivers of political and social daily life comingled with the blinks of desire and fear they bring to normal existence. This space is in-habited with strange creatures, drowned in their own fantasies. Some flee there from uncertain and hostile reality, others attempt to find some unknown path to their cherished wishes for a happier being. This escape plays into a somnambulist defense strategy against symptoms of depression. Kulchynska, the curator, raises the question whether the exhibited artists’ dreamscapes are also a space(s) of potentiality, where unseen life forms grow, nurture and spread their seeds for a new societal body.

Kulchynska states, “The dream for a society that might succeed in a radically different way flashed during the Maidan revolution in practices of spontaneous order, solidarity, and mutual support; in a sense of communality and trust that suddenly united people who never would have previously met. The revolutionary moment of exceptional experience has passed, yet the dream settled in memories, infusing the fantasies and practices of persons and groups, heating tiny utopias somewhere in the urban thickets, nurturing frustrations, as well as political speculation.” These selected videos illustrate the hidden life of this dream(s), invoking parallel senses of angst, fatigue, and uncertainty of the turbulent war years. These artists have never been to the front lines, nor have they experienced or witnessed battle. Yet, from 2014 until the present, they have lived near it and in its shadow.

Lesia Kulchynska, PhD is a Kyiv-based art curator and visual studies researcher affiliated with the Research Platform of the Pinchuk Art Center and the Department of Screen and Performance Art Studies at the Rylsky Institute of Art Studies, Folklore and Ethnology at the National Academy of Sciences of Ukraine. She also teaches cultural studies at the Kyiv Academy of Media Arts (written and developed the course, “Violence of the Image”). She worked as a curator at the Visual Culture Research Center / VCRC (2011-2019) and Set Independent Art Space (2019-2020). From 2018-19, Kulchynska was a Fulbright Scholar residing at New York University. Her research interests are the theory and history of the image and the theory of cinema.

Dr. Kulchynska is the author Meaning Production in Cinema: Genre Mechanisms (Kyiv, 2017), editor of The Right to the Truth: Conversations on Art and Feminism (Kyiv, 2019) and Joseph Beuys. Everyone is an artist (Kyiv, 2020).