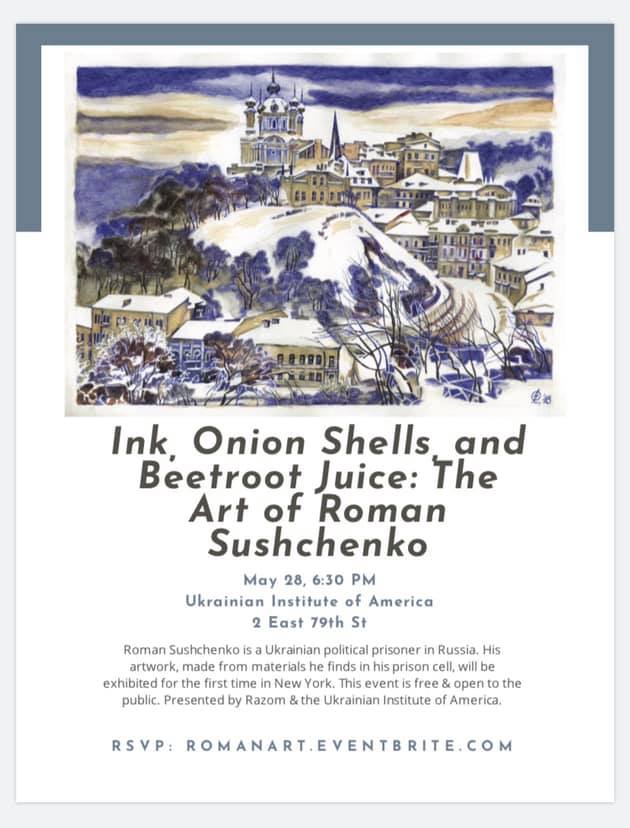 The Ukrainian Institute of America and Razom cordially invite you to join the exhibition of paintings by Roman Sushchenko, a Ukrainian journalist who is serving a sentence in prison in Russia having been unlawfully convicted on politically motivated charges. Roman Sushchenko is not a criminal and he does not belong in prison – he is a victim of the oppression of free journalism, he is an artist and a Ukrainian.

While art has always been Roman Sushchenko’s passion, his artistic means while behind bars are very limited. That’s what makes his artwork unique – they are created in prison with all that is available to him: ballpen, onion shells, beetroot juice, tea, detergent and ketchup.

Prints of Sushchenko’s original artwork from prison will be shown at Ukrainian Institute of America, followed by a presentation by activists, journalists and Roman Sushchenko’s family and friends (by video). The New York Correspondent for Ukrinform, Gosha Tykhyi, will discuss the facts of his case.

Roman Sushchenko’s art has never been shown in New York before, despite already being exhibited in cities such as Brussels and Kyiv to much acclaim. Do not miss your chance to see with your own eyes the art that comes from the memory of a man with limited resources but of extreme talent and high spirit.

Networking drinks and light appetizers provided by Veselka will be served before the presentation.