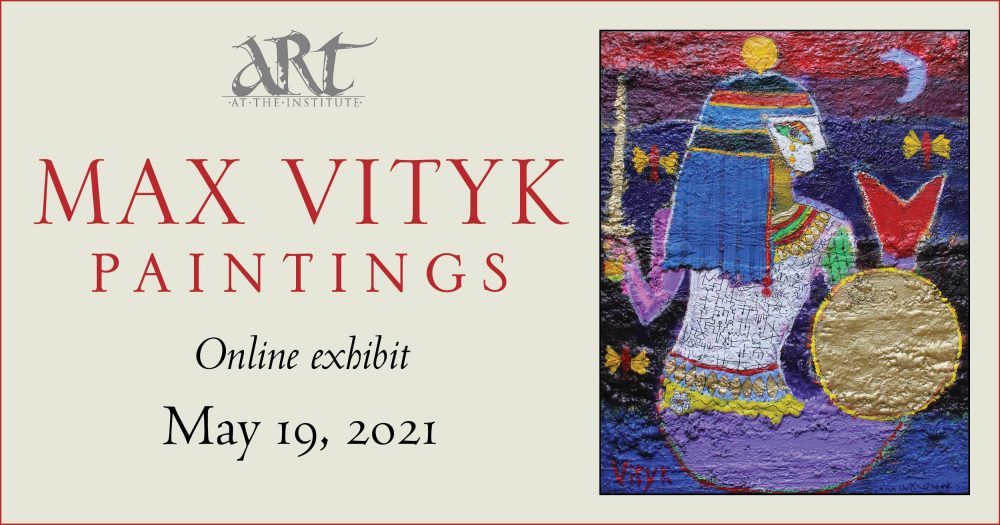 The key to Vityk’s expressionist figurative art is the pathos of raw visions. His archetypal figures embrace narrative elements culled from ancient rock engravings and mythological and folk symbols. For these series, he created modernized mystical beings invoked by mysticism, folklore, geography, and turbulent political events as witnessed during his stays in Egypt and Ukraine. Metaphysically placed on a plane of the eternal struggle between good and evil, Vityk’s paintings plead for an artist’s ultimate vision of freedom and change.

His in-depth knowledge of Earth’s instability reinforces the chaos of his subject: nature and man are inseparable. Not only are geological formations referenced in these works — Vityk is a geologist by profession — but his interest myth and in the mystical power of the Earth’s underbelly feeds into this large-scale format.

As if purging his mind of remembered turmoil and violence, Vityk stated, “Painting for me feels like a meditation. I often paint with my eyes closed; to let my subconscious mind be in control.”

And, noted fellow artist Anatoly Kryvolap has said of Vityk: “Finally, a completely free person has appeared in Ukrainian pictorial art. Everything we had before was slightly repeated, slightly withered, slightly too aestheticized. I have suffered from this all the time and tried to ‘heat up’ our pictorial art to the condition of a volcano about to explode. Max is the volcano that has exploded.”

This online exhibition will include a recorded video conversation between Max Vityk and Walter Hoydysh, PhD, Director of Art at the Institute and exhibition curator, discussing the works presented, the artist’s working methodology, and the role of myth and geology in the artist’s paintings.

Born in Lviv, Ukraine, Max Vityk he studied and received a doctorate in geology at the Lviv State University. In 1989 he moved to the U.S. where he worked for the ExxonMobil and Shell corporations in Houston. During extensive travels, he studied American modern art and took up painting, heavily influenced by the artists of the Abstract Expressionist school. Vityk has since exhibited widely, attracting a devoted audience to his penetrating vision. Recent exhibitions include Arts-Mart Gallery (TAM. Gallery) in Cairo, Egypt, International Museum Art and Science in McAllen, Texas and Tauvers Gallery International in Kyiv, Ukraine. He presented works at Scope Art fair in Basel, Context Art fairs in New York and Miami, and at Art Kyiv Contemporary Fair in Ukraine. Vityk’s monumental project “Energy” is on permanent display at Shell Headquarters in The Hague, The Netherlands. This is his third solo exhibition with the Ukrainian Institute of America.

Reception for the artist: Friday, October 8 from 6:00 to 8:00pm In compliance with the most current New York State and New York City COVID public health and safety guidelines, proof of vaccination and masks are required for attendance of

Individual Early Bird tickets will be available through September 30th for $250 and at $175 for Next Gen guests (under 40), so secure your spot now!