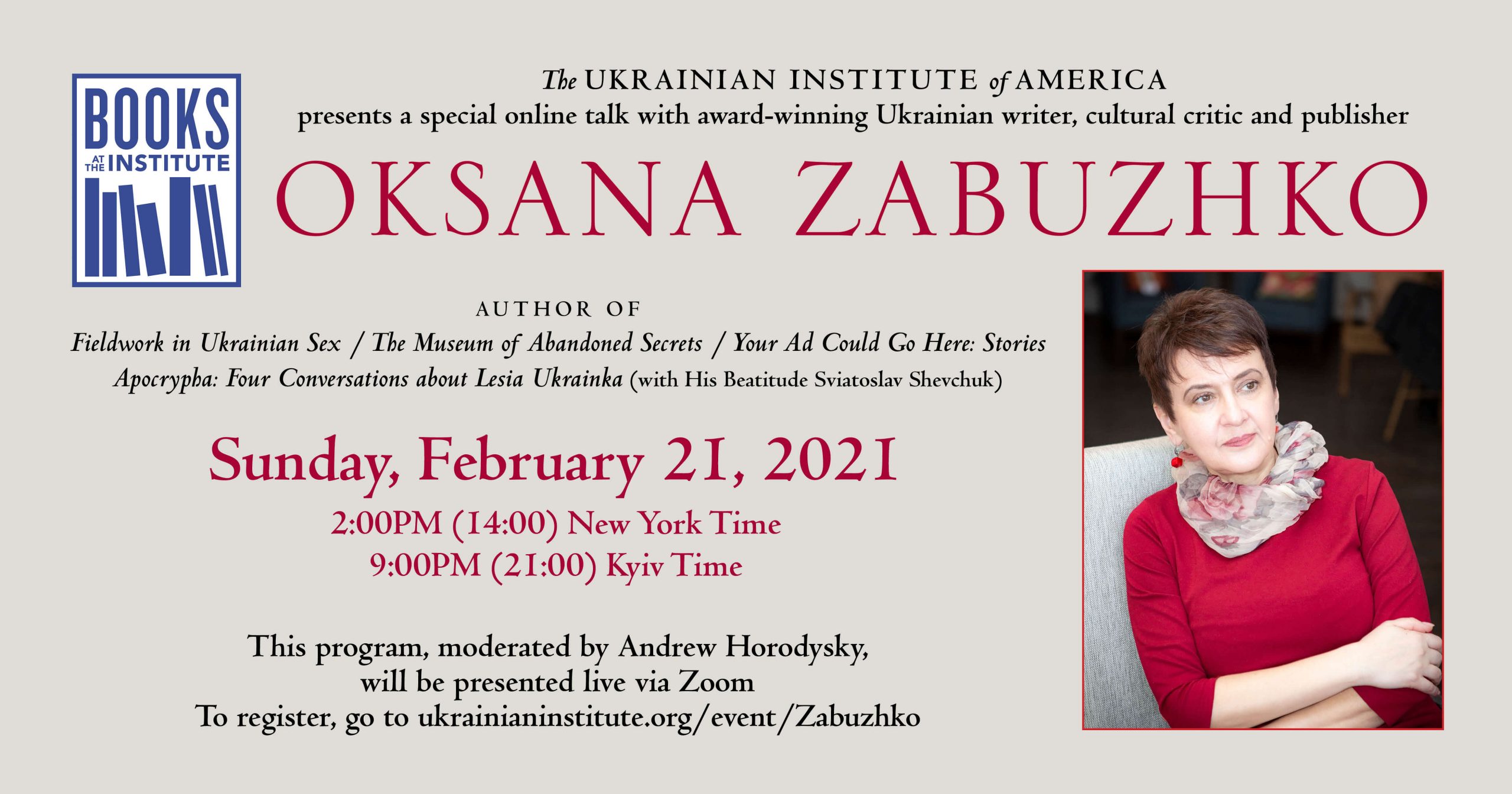 is delighted to invite you to a special virtual event

Author of Apocrypha: Four Conversations about Lesia Ukrainka (with His Beatitude Sviatoslav Shevchuk), Your Ad Could Go Here: Stories, Notre Dame d’Ukraine: Ukrayinka in the Conflict of Mythologies, Fieldwork in Ukrainian Sex, The Museum of Abandoned Secrets.

We will be presenting this event virtually via Zoom.
Moderated by Andrew Horodysky.

Join us online for an afternoon conversation with Oksana Zabuzhko as she talks about her latest publishing projects, the craft of writing, and cultural and social topics in Ukraine that inform her thinking. Attendees will have the opportunity to contribute comments and ask questions.

One of Ukraine’s leading post-Chornobyl writers and intellectuals, Oksana Zabuzhko burst on the international literary scene in 1996 with the publication of her novel, Fieldwork in Ukrainian Sex (published in 2011 in English, translated by Halyna Hryn), which was translated into sixteen languages and hailed as “the Bible of Ukrainian feminism.” She has since published over 20 other books, including collections of criticism, essays and poetry, the prize-winning novel, The Museum of Abandoned Secrets (published in 2012 in English, translated by Nina Murray) and her latest collection of short prose, Your Ad Could Go Here: Stories (published in English in 2020, with translations by Marco Carynnyk, Marta Horban, Halyna Hryn, Askold Melnyczuk, and Nina Murray).

Ms. Zabuzhko made her poetry debut at the age of 12, however, as her parents had been blacklisted during the Soviet purges of the 1970s, it was not until the perestroika that her first collection was published. She studied and graduated from the department of philosophy of Kyiv Shevchenko University, obtained her PhD, and has worked as a research associate for the Institute of Philosophy of the Ukrainian Academy of Sciences. In the early 1990s she lectured in the US as a Fulbright Fellow and was Writer-in-Residence at Penn State University, Harvard University, and University of Pittsburgh. She has established herself as one of Ukraine’s leading public intellectuals and defenders of democracy, listed by the press among Ukraine’s top 100 most influential people. Ms. Zabuzhko’s books have been translated into Bulgarian, Czech, Dutch, English, German, Hungarian, Italian, Persian, Polish, Romanian, Russian, Serbian, Swedish.

She is the recipient of a MacArthur Grant (2002), the Antonovych International Foundation award (2008), the Order of Princess Olha (2009), the Angelus Central European Literary Prize (2013), and the Shevchenko National Prize of Ukraine (2019). Her novel, The Museum of Abandoned Secrets, won The Book of the Year in Ukraine, and was rated by Polityka (Poland) as “one of the most important Eastern European novels after 1989.”

Ms. Zabuzhko lives in Kyiv with her partner, artist Rostyslav Luzhetsky. Together, they run Komora Publishing, specializing in Ukrainian and world fiction and non-fiction, classic and contemporary. Komora’s mission is to introduce Ukrainian audiences to attention-worthy, yet, not widely promoted names, events and trends, contributing to the growth of national reading standards to the levels rivaling that of the most advanced cultures.

The Museum of Abandoned Secrets

Your Ad Could Go Here: Stories

Many thanks to all of you who have already made a donation to support our online programs. We are grateful for your generosity and are most appreciative of your steadfast commitment to our organization.

Donations of any amount are greatly appreciated and help us to continue to fulfill our mission of showcasing the very best of Ukrainian arts and culture to the world.

For further information: Please contact us at (212) 288-8660 or mail@ukrainianinstitute.org.