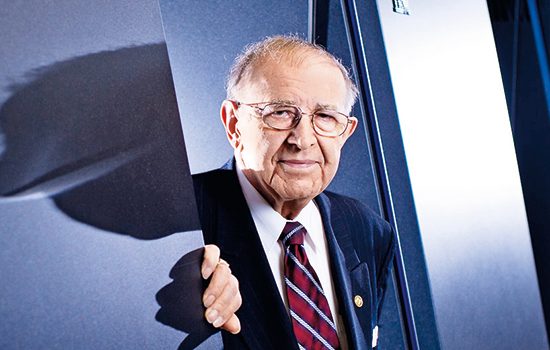 Today, April 17th, we celebrate the 89th birthday of Dr. Lubomyr Romankiw, an IBM digital pioneer and one of the Ukrainian Institute of America’s most distinguished members.

As a 1986 IBM Fellow and researcher at IBM’s Thomas J. Watson Research Center in Yorktown Heights, New York, Dr. Romankiw holds over 65 patents and has published over 150 scientific papers.

In a ceremony on May 2, 2012, he was one of two IBM scientists inducted into the National Inventor’s Hall of Fame for their invention that paved the way for the advancement of commercial disk storage technology used in computers, digital cameras and other devices. He and Dr. David Thompson were honored for their invention of a technique that produced the first practical and manufacturable thin film magnetic head, which increased the density of data stored on magnetic disks and dramatically reduced the cost of data storage.

Dr. Romankiw is active in various organizations, most notably serving as the Chief Scout of the Plast Ukrainian Scouting Organization, and he is a member of other Ukrainian organizations, including the Ukrainian Institute of America.

Dr. Lubomyr Romankiw grew up in Western Ukraine and fled from the Soviets to Canada. He earned his B.S. from the University of Alberta and both his M.S. and Ph.D. degrees in Metallurgy and Materials from the Massachusetts Institute of Technology.

The Ukrainian Institute of America wishes Dr. Romankiw a very Happy Birthday and continued health, happiness and success in the coming year.

Today, April 17th, we celebrate the 89th birthday of Dr. Lubomyr Romankiw, one of the Ukrainian Institute of America’s most distinguished members