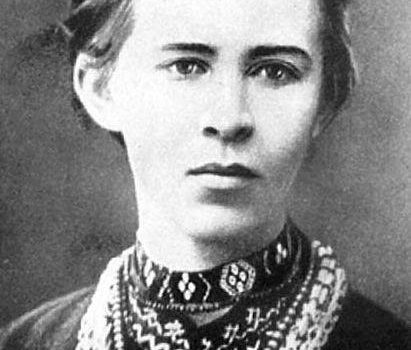 Today, February 25, we celebrate the life and art of Lesya Ukrainka (1871-1913) who was the foremost woman writer in Ukrainian literature and a leading figure in its modernist movement. She was also known as an activist for the advancement of political, civil and women’s rights. 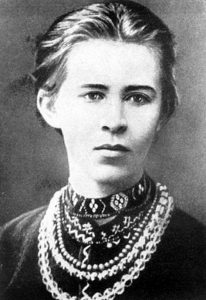 The daughter of intellectuals, Lesya Ukrainka had a number of influential people to mentor her from a young age. Her mother, Olha Drahomanova-Kosach, was better known by her penname Olena Pchilka, and was a publisher, writer, interpreter and civil activist, and her mother’s brother (Lesya’s uncle) was renowned scientist, philosopher, historian and public figure, Mykhaylo Drahomanov. Lesya’s father, Petro Kosach, was a strong advocate for the progress of Ukrainian culture, providing financial support for publishing Ukrainian literature. Her brother, Mykhaylo, also gained recognition in the literary world where he was known by the penname of Mykhaylo Obachny.

During Lesya’s childhood, Russian was the primary language in public education. To ensure that their children gained a proper appreciation for the Ukrainian language, it was the only language spoken in the Kosach home, with Ukrainian tutors seeing to their educational requirements. With such individualized attention, Lesya Ukrainka could read by the age of four, and learned to read in a number of languages, enabling her to read great literary works in the languages in which they had been written.

Ukrainka was stricken with tuberculosis in 1881 and traveled widely thereafter in search of a cure. Her early lyrical verse, influenced by Taras Shevchenko, dealt with the poet’s loneliness and social alienation and was informed by a love of freedom, especially national freedom. The collections “On the Wings of Songs” (1893); “Thoughts and Dreams” (1899) and “Echoes” (1902) established her as the leading young Ukrainian poet of the day.

She was active in the Ukrainian struggle against tsarism and joined Ukrainian Marxist organizations, translating the Communist Manifesto into Ukrainian in 1902. In 1907 she was arrested and, following her release, was kept under observation by the tsarist police.

Ukrainka concentrated on poetic dramas from about 1906 on. Her plays were inspired by various historical milieus, e.g. the Old Testament in “A Woman Possessed” (1901) and “The Babylonian Captivity” (1908), the world of ancient Greece and Rome, and the early Christian era in “In the Catacombs” (1906) and “On the Field of Blood” (1911). Folk songs and fairy tales provide the framework for “The Forest Song (1912), in which Ukrainka reflects on the timeless tension between exalted ideals and sordid reality.

The life and works of Lesya Ukrainka are well documented and remain as a tribute to her contribution to Ukrainian literature and identity.