Today, July 7th, Ukrainians celebrate the Nativity of John the Baptist, a prophet who foretold the coming of Jesus Christ. This feast is very important for Ukraine’s Christians, as Jesus himself called John his predecessor, strongly expressed his respect to John and admired his spirit as the greatest of all on the earth. The day of the Nativity of John the Baptist coincided with the pagan midsummer celebration or, the feast of Ivan Kupalo (Ivana Kupala).

Kupalo was believed to be the god of love and harvest and the personification of the earth’s fertility.

Ivana Kupala day was rich in customs and traditions, many of which were connected with water and fire. 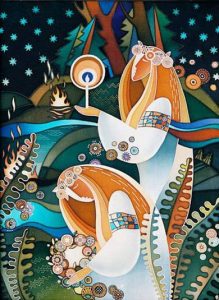 Young people gathered together outside the village in the forest or near a stream or pond, where they built bonfires. They also burnt herbs and various other items that were blessed. A legend says that this was the only night of the year when you could see fern flowers glow in the dark, trees walk from place to place, and the village witches come out.

Girls sang special songs (“kupalni”), with a lot of references to love and marriage. They also put a burning candle in the middle of a flower garland and floated it on the water and told their fortunes from the behavior of the garland in the water.

Boys and girls jumped over a fire holding hands. According to the legend, the couple would stay together as long as they did not let go of each other’s hands.

Magical properties were ascribed to the plants and herbs gathered on Kupala eve. It was believed that such herbs could protect one from the evil forces of nature and even cure illnesses in humans and animals. Local priests seemingly sanctioned this belief by blessing the herbs in church on the day of the Nativity of Saint John the Baptist. On the morning of that day girls washed themselves with the dew that had fallen on Kupala eve, which they collected in a bowl left outside overnight, and ran barefoot through the bedewed fields in the belief that doing so would accelerate their opportunity to get married. The sick would roll naked in the dewy meadows in the belief that this action would help them get well, and farmers would run their cattle through such meadows in the belief that this routine would prevent disease.

Today, in many corners of Ukraine people continue to celebrate Ivana Kupala as for them this holiday is an attempt to revive their heritage and to remind themselves of the country’s ancient customs.

Today, July 7th, Ukrainians celebrate the Nativity of John the Baptist and the feast of Ivana Kupala