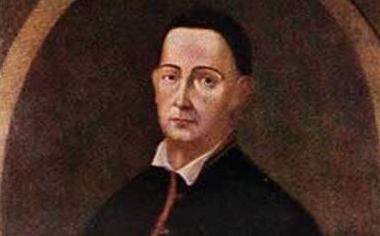 “The world tried to capture me, but didn’t succeed.”
Hryhoriy Skovoroda

Born on this day in 1722, he was educated at the Kyiv Mohyla Academy. Hryhoriy spent over 10 years in Kharkiv, teaching poetics, syntax, Greek, and ethics. After his dismissal from the college, he abandoned any hope of securing a regular position and spent the rest of his life wandering about eastern Ukraine. Financial support from friends enabled him to devote himself to reflection and writing. Most of his works were dedicated to his friends and circulated among them in manuscript copies.

Although there is no sharp distinction between Skovoroda’s literary and philosophical works, his collection of 30 verses (composed from 1753 to 1785) titled Sad Bozhestvennykh Pisen (Garden of Divine Songs), his dozen or so songs, his collection of 30 fables (composed between 1760 and 1770) titled Basni Khar’kovskiia (Kharkiv Fables), his translations of Cicero, Plutarch, Horace, Ovid, and Muretus, and his letters, written mostly in Latin, are generally grouped under the former category. Some of his songs and poems became widely known and became part of Ukrainian folklore.

His philosophical works consist of a treatise on Christian morality and 12 dialogues.

For Skovoroda the purpose of philosophy is practical—to show the way to happiness. Hence, the two central questions for him are what happiness is and how it can be attained. For him, happiness is an inner state of peace, gaiety, and confidence which is attainable by all. To reach this state, some understanding of the world and oneself and an appropriate way of life are necessary. Skovoroda approaches metaphysics and anthropology not as a speculative thinker, but as a moralist: he does no more than outline those truths that are necessary for happiness. His basic metaphysical doctrine is that there are two natures in everything: the ideal, inner, invisible, eternal, and immutable; and the material, outer, sensible, temporal, and mutable. The first is higher, for it imparts being to the second. This dualism extends through all reality—the macrocosm or universe, and the two microcosms of humanity and the Bible. In the macrocosm the inner nature is God, and the outer is the physical world. Skovoroda’s view on God’s relation to the world is panentheist rather than pantheist. In man the inner nature is the soul; the outer, the body. In the Bible the inner truth is the symbolical meaning; the outer, the literal meaning.

From this metaphysical scheme Skovoroda drew a number of fundamental conclusions for practical life. Since the universe is ordered by a provident God, every being has been provided with all that is necessary for happiness. The assurance that what is necessary is easy and what is difficult is unnecessary (for happiness) brings peace of mind. It also serves as a criterion for the material conditions of happiness: we need only those goods that are necessary to health and are available to all people. But to dispel anxiety about material security is not enough for happiness. Active by nature, humans must also fulfill themselves in action by assuming the congenial task or vocation assigned to them by God. To pursue one’s task regardless of external rewards is to be happy, while to pursue wealth, glory, or pleasure through uncongenial work is to be in despair. Furthermore, since vocations are distributed by God in such a way as to ensure a harmonious social order, to adopt an uncongenial task leads to social discord and unhappiness for others.

The doctrine of congenial work is the central doctrine in Skovoroda’s moral system. Although it is not metaphysically plausible, it expresses his faith in the creative potential of human beings and the possibility of self-fulfillment in this life for everyone.

Hryhoriy’s poetic style, ideas, and moral example have played an important role in the rebirth of Ukrainian culture in the 20th century. The fullest editions of Skovoroda’s works were published in Kharkiv in 1894. An English translation of his fables and aphorisms, together with a biography and an analysis of the works, was published by D.B. Chopyk in 1990.