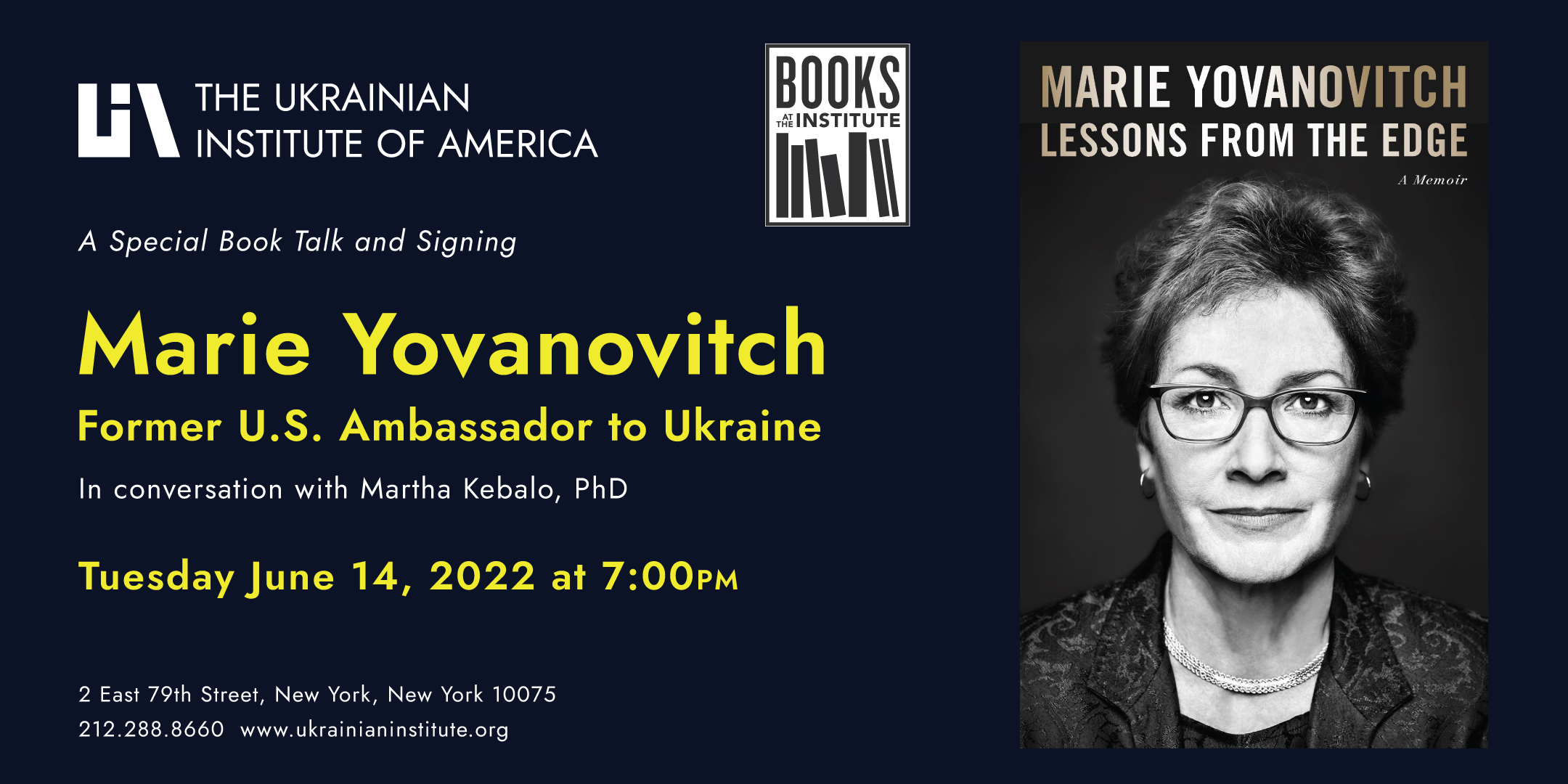 Lessons From The Edge: A Memoir

Books will be available for purchase for $25.

Marie Yovanovitch was at the height of her diplomatic career when it all came crashing down. In the middle of her third ambassadorship—a rarity in the world of diplomacy—she was targeted by a smear campaign and abruptly recalled from her post in Kyiv, Ukraine. In the months that followed, she endured personal tragedy while simultaneously being pulled into the blinding lights of the first impeachment inquiry of Donald Trump. It was a time of chaos and pain, for her and for the nation.

Yet Yovanovitch was no stranger to instability and injustice.

Born into a family that had survived Soviet and Nazi terror, she first saw the corrosive effect of corruption in Somalia while cutting her teeth as a diplomat in the male-dominated world of the 1980s State Department. She was an eyewitness to the 1993 constitutional crisis in Russia and the street fighting in Moscow. And she rose to the top of her profession in the crucible of the former USSR, where she saw how President Vladimir Putin adeptly exploited corrupt leaders in neighboring countries and undermined their developing democracies.

Nowhere was Putin’s aggression clearer than in Ukraine, where Russia meddled in elections, launched cyberattacks, peddled misinformation, illegally annexed Crimea, invaded the Donbas, and attacked Ukrainian ships in the Black Sea. But when Yovanovitch was abruptly recalled from her post and Ukraine’s democratically elected president, Volodymyr Zelensky, found himself set upon by Trump, it became clear just how dangerously close to the edge America itself had strayed.

Through it all, Yovanovitch tirelessly advocated for the Ukrainian people, while advancing U.S. interests and staying true to herself. When she made the courageous decision to participate in the impeachment inquiry—over the objections of the Trump administration—she earned the nation’s respect, and her dignified response to the president’s attacks won our hearts. She has reclaimed her own narrative, first with her lauded congressional testimony, and now with this powerful memoir: the dramatic saga of one woman’s role at the vanguard of American foreign policy during a time of upheaval, for herself and for our country.

Marie Yovanovitch is a Senior Fellow at the Carnegie Endowment for International Peace and a non-Resident Fellow at the Institute for the Study of Diplomacy, Georgetown University. Previously, she served as the U.S. Ambassador to Ukraine (2016-2019), the Republic of Armenia (2008-2011) and the Kyrgyz Republic (2005-2008). She also served as the Dean of the School of Language Studies at the Foreign Service Institute, U.S. Department of State and as the Deputy Commandant and International Advisor at the Dwight D. Eisenhower School for National Security and Resource Strategy, National Defense University. Earlier she served as the Principal Deputy Assistant Secretary for the Bureau of European and Eurasian Affairs, where she coordinated policy on European and global security issues. Before that, she was the bureau’s Deputy Assistant Secretary responsible for issues related to the Nordic, Baltic, and Central European countries.

In 2003-2004, Ambassador Yovanovitch was the Senior Advisor to the Under Secretary of State for Political Affairs. Prior to that, she was the Deputy Chief of Mission of the U.S. Embassy in Kyiv, Ukraine. Within the Department of State, Ambassador Yovanovitch has worked on the Russia desk, the Office of European Security Affairs, and the Operations Center. She has also worked overseas at the U.S. Embassies in Moscow, London, Ottawa, and Mogadishu.

Following her retirement in 2020, Ambassador Yovanovitch received the Trainor Award for Excellence in the Conduct of Diplomacy from Georgetown University, the inaugural Richard G. Lugar Award from Indiana University, the 2020 PEN/Benenson Courage Award from Pen/America, the Morgenthau Award from the Armenian Assembly of America, the American Spirit Award for Distinguished Public Service from the Common Good, and the Paul H. Douglas Award for Ethics in Government.

Ambassador Yovanovitch is a graduate of Princeton University where she earned a BA in History and Russian Studies. She studied at the Pushkin Institute and received an MS from the National Defense University.

Martha Kichorowska Kebalo received her PhD in Cultural Anthropology from the Graduate Center at CUNY, executing fieldwork in the Cherkasy area of central Ukraine among women’s organizations arising in the post-Soviet period. She continues to maintain collaborative contacts with women activists in Ukraine and in the Ukrainian diaspora. Since 2013, she has served as the Main Representative to the UN for the World Federation of Ukrainian Women’s Organizations (WFUWO), an international NGO in consultative status with UN’s ECOSOC. She is a member of the board of the Shevchenko Scientific Society (New York) and of Branch 64 of the Ukrainian National Women’s League of America. Dr. Kebalo is preparing a history of the UNWLA for publication, “The UNWLA 1925-2020: Women’s Community, Citizenship, and Commitment in the Ukrainian Diaspora.”

What others say about Lessons From The Edge

“Lessons From the Edge is a brilliant, engaging, and inspiring memoir from one of America’s wisest and most courageous diplomats—essential reading for current policymakers, aspiring public servants, and anyone who cares about America’s role in the world.”

“In this compelling memoir of personal struggle, patriotic idealism, adventure, and high-stakes politics, Marie Yovanovitch shares her unique experience inside the post-Cold War State Department. Lessons from the Edge illuminates the vital role that diplomats play in our democracy, and takes readers along on one woman’s journey of courage, sacrifice, and transformation.”

“First through the breach, Ambassador Yovanovitch showed Americans what courage and patriotism looks like. More than essential reading, Lessons from the Edge is thoroughly engaging and impossible to put down, showing us how an introverted career diplomat overcame the most vicious of smear campaigns to become a foreign service legend.”

“When Senator McCain and I visited Ambassador Marie Yovanovitch in Ukraine in 2016, I saw up close her steadfast dedication to our country. And over the next four years, the world saw that her commitment to combating corruption and defending democracy knew no borders. Her memoir is a testament both to the importance of diplomacy and her own strength of character—even in the most trying of circumstances.”

“At turns moving and gripping and always inspiring… a powerful testament to a uniquely American life well-lived and a remarkable career of dedicated public service at the highest levels of government.”

— Fiona Hill, New York Times best-selling author of There Is Nothing for You Here: Finding Opportunity in the Twenty-First Century

“Written with the humility of a true public servant and a novelist’s eye for detail, Ambassador Yovanovitch’s memoir takes readers inside the fast-paced world of modern diplomacy and lays bare the rot and corruption of the Trump administration.”

To have a copy of the book signed, Lessons From the Edge will be available for purchase ($30.00) at The Ukrainian Institute the evening of the talk and presentation.

Marie Yovanovitch. Lessons From The Edge: A Memoir

For further information: Please contact the Ukrainian Institute of America at (212) 288-8660 or mail@ukrainianiannstitute.org.