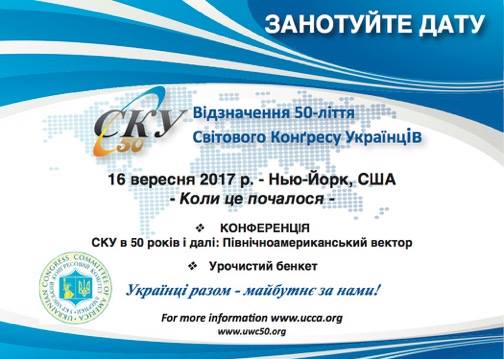 You are respectfully invited to attend the upcoming historic Conference and Banquet to Commemorate the 50th Anniversary of the Ukrainian World Congress (UWC) – the international coordinating body for Ukrainian communities in the diaspora representing the interests of over 20 million Ukrainians.

As New York City was the venue for the First World Congress of Free Ukrainians in 1967 and is historically connected to the development of the UWC which unites Ukrainian communities around the world to further the interests of Ukraine and the Ukrainian people, New York City will host a celebratory event on Saturday, September 16, 2017 at the Princeton Club of New York.

The full-day conference, organized by the UWC and its member organization, the Ukrainain Congress Committee of America, is entitled, UWC AT 50 AND BEYOND: THE NORTH AMERICAN VECTOR, and will feature policy-makers, scholars and civil society representatives from the United States, Canada and Ukraine to discuss the historical significance of the UWC, and the integral role the organized Ukrainian diaspora has played to assist Ukraine over the five decades since the inception of the UWC.

The conference will be followed by a Commemorative Banquet during which special guest speakers will highlight the accomplishments of the UWC throughout its 50-year history and, more importantly, focus on a common vision for our future.

The complete program with a list of invited speakers is attached, as is the registration form. You are welcome to attend all of the panel discussions, and we encourage you to also attend the evening’s Commemorative banquet.

Due to the time constraints involved with organizing an international forum, we kindly ask that you rsvp no later than September 8, 2017, concerning your participation. Please note that seating is limited, therefore we encourage you to RSVP at your earliest conveience to assure participation.

For further information or to register for the event, kindly contact Tamara Olexy, UCCA Executive Director either by phone (212) 228-6840 or email tolexy@ucca.org. Additional information about the UWC’s 50th Anniversary Celebrations can be found at www.uwc50.org

Join a Conference and Banquet to Commemorate the 50th Anniversary of the UWC on September 16, 2017