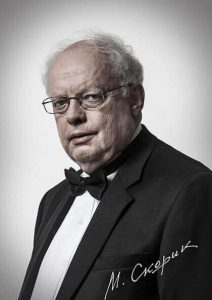 The Ukrainian Institute of America, its Board of Directors and the Music at the Institute (MATI) Concert Series mourn the loss of their dear friend, colleague, and Ukraine’s most celebrated composer, Myroslav Skoryk (July 13, 1938 – June 1, 2020). Myroslav Skoryk was a recipient of the prestigious Shevchenko Prize (1987), titles of Hero of Ukraine and People’s Artist of Ukraine, and, in 1998, was awarded the Ukrainian President’s Order of Merit.

Born in Lviv, Ukraine, in 1938, Skoryk, whose exceptional musical talent was recognized in his childhood by his great-aunt, the famous opera singer Solomiya Krushelnytska, was enrolled in the Lviv Music School in 1945. However, his education was interrupted in 1947, when the Skoryk family was arrested by the Soviet authorities and exiled to Sibera.  Skoryk was allowed to return to Lviv only in 1955, after the death of Stalin. He was then accepted to the Lviv Conservatory, where he studied composition with Stanyslav Lyudkevych, Roman Simovych, and Adam Soltys. From 1960 to 1964, Skoryk studied at the Moscow Conservatory in the doctoral program with the celebrated Dmitri Kabalevsky.  Upon graduation, he joined the faculty of the Theory of Music and Composition Department at the Lviv Conservatory and, in 1966, the faculty of the Kyiv Conservatory. He continued to teach at the Kyiv Conservatory, and also headed the composition department at the Lviv Conservatory. After the death of Borys Lyatoshynsky, Skoryk, despite his young age, became one of Ukraine’s most important professors of composition. His many students include such prominent contemporary composers as Stankovych, Karabyts, Kiva, Zubytsky, Stepurko, Havrylets, Kozarenko, Ilyin, and Balakauskas.

Myroslav Skoryk was also a respected musicologist, author of numerous articles and two books, The Modal System of Prokofiev (1969) and The Structural and Expressive Aspects of Chords in 20th Century Music (1983).  A performing pianist and Founder and Artistic Director of the International Festival of Contemporary Music “Contrasts,” Kyiv Music Fest International Festival and since 2011, he had been Artistic Director of the National Opera of Ukraine.

In addition, he wrote several violin and piano concertos, choir pieces, works for a string orchestra, the opera “Moisey” ( “Moses”), plus ballet and movie scores. His music often drew from the rich well of Ukrainian folklore, but Maestro Skoryk seldom quoted themes literally.  Rather, he incorporated them organically into his works, synthesizing idiomatic folk rhythms and melodic gestures with the idiosyncracies of his personal style.  His music can be described as the “new folklorism,” the precursor of “new romanticism.”

Skoryk’s “Melodia” from the movie “Vesokyy Pereval,” is loved by millions of people across the globe and became a second unofficial National Anthem of Ukraine, a postcard of Ukraine’s rich and versatile culture. «Мелодія»/”Melodiya” -Мирослав Скорик / Myroslav Skoryk, Rome October 2012

Myroslav Skoryk died on June 1, 2020, in Kyiv, Ukraine. He is survived by his wife, Adriana Skoryk, his daughter Milana Skoryk and grandsons Danylo and Demian Perepiatko, as well as his son Nazar Skoryk (wife Solomiya Skoryk).

May he rest in eternal peace! Vichnaya Pamiat!

On March 4th, 2018, Music at the Institute (MATI) presented music of Myroslav Skoryk in celebration of the composer’s 80th Birthday. See photos from this celebration HERE.