Please see a video of the Ukrainian-American writer Yuriy Tarnawsky reading a passage from his novel Three Blondes and Death “Why is water so beautiful”. The novel has been described as a Mies van der Rohe’s skyscraper towering over the cottages of contemporary American fiction. 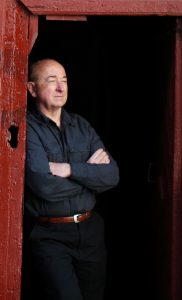 Yuriy Tarnawsky is a bilingual Ukrainian/English author of some three dozen books. His Ukrainian language books include two volumes of collected poetry Poems About Nothing and Other Poems on the Same Subject and They Don’t Exist, a hexalogy of plays patterned on Greek tragedy 6×0, a book of selected prose I don’t Know, and a book of selected essays Flowers for the Patient. His English language books include the novels Meningitis, Three Blondes and Death, The Placebo Effect Trilogy, Warm Arctic Nights, and The Iguanas of Heat, the collections of short fictions Short Tails and Crocodile Smiles, a book of Heuristic Poetry Modus Tollens/Improvised Poetic Devices, a collection of selected essays and interviews Claim to Oblivion, and a book of literary exercises Literary Yoga. An engineer and linguist by training, he has worked as computer scientist at IBM Corporation and professor of Ukrainian literature and culture at Columbia University. For his contribution to Ukrainian literature he was awarded the order of merit of Prince Yaroslav the Wise by Ukrainian government. In March of 2019 he was inducted by New Jersey Institute of Technology, his alma mater, into its Hall of Fame.