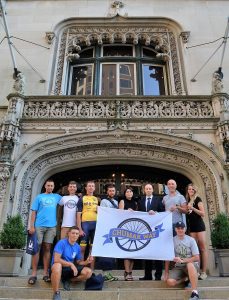 It was a pleasure for us to welcome Chumak Way cycling tour / Велопробіг «Чумацький Шлях» cyclists on the 27th anniversary of Ukraine’s Independence Day and to acquaint them with the Ukrainian Institute of America and its mission.

The team of 10 cycling enthusiasts and war veterans, called “Chumak Way” rides 100 to 200 kilometers per day on its journey from the Pacific to the Atlantic to raise awareness about the need for peace in Ukraine.

Thank you Consulate General of Ukraine in New York for organizing this meeting.