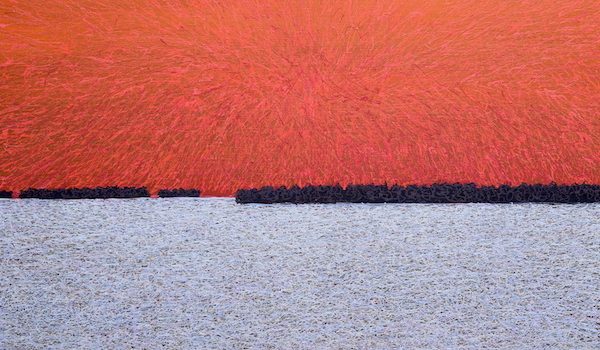 Today, May 12th, we celebrate the 84th birthday of Ukrainian artist Ivan Marchuk. 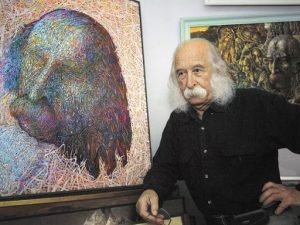 Cultivating the highest attention for detail and precision-craftsmanship, Marchuk’s signature works are executed in an elaborate, original technique — drafting hundreds of intertwining fine lines, or filaments, enhancing an illusionistic effect of apparent depth, luminous enamel-like surfaces, and rich gradations of light. Early in his career, he dubbed this manner of painting “plontanism,” a neologism created of the Ukrainian word for the verb “to weave.”

Ivan Marchuk was born in 1936 in Moskalivka, Volhyn region of northwestern Ukraine. He graduated from the Ivan Trush Lviv State Institute of Applied and Decorative Art (Lviv, Ukraine). He began exhibiting in Moscow in 1979 and Kyiv in 1980. After the 1986 Chornobyl nuclear plant disaster, Marchuk created nightmarish compositions depicting the total destruction of the planet. Until 1988, he was denied membership in the Union of Artists of Ukraine because his themes and style did not conform to the officially prescribed socialist realism. Persecuted by then Soviet authorities, he left the USSR for Australia in 1989, before living in the US and Canada.

In 1996, Marchuk’s series of paintings “Shevchenkiana” and “Voice of My Soul” won him the Shevchenko National Prize, the highest state prize of Ukraine for works of culture and the arts. He eventually returned to permanently settle in Ukraine in 2001. His works have been exhibited in Ukraine, Belgium, Germany, Hashemite Kingdom of Jordan, Lithuania, Luxembourg, Poland, Slovakia, Switzerland, Thailand, Turkey, and the US. The artist’s solo showing with the Ukrainian Institute of America took place in April of 2019. Ivan Marchuk lives and works in Kyiv, Ukraine.

The Ukrainian Institute of America wishes Mr. Marchuk a very Happy Birthday and continued health, happiness and success in the coming year.

Today, May 12th, we celebrate the 84th birthday of Ukrainian artist Ivan Marchuk