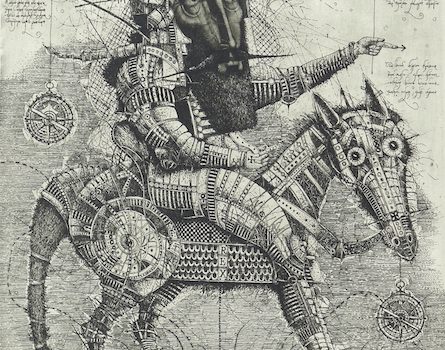 Art at the Institute announces a special exhibition of forty intaglio prints by Ukrainian artist Oleh Denysenko, introducing recent works and archetypal selections from his graphic oeuvre of the past decade. The exhibition will open Friday, November 10, 2017 and continues through November 29. Curated by Walter Hoydysh, PhD, director of Art at the Institute, this exhibition marks the artist’s second solo show with The Ukrainian Institute of America.

An innovative and prolific artist practiced in the disciplines of painting, sculpture, calligraphy, and book illustration, Mr. Denysenko is most recognized, internationally, for his intricate etchings on paper. An astoundingly inventive draftsman, due in part to years of studying the moralizing art of Northern European masters such as Bosch, Bruegel, Cranach and Dürer, among others, Denysenko developed a highly original framework and spatial base around which an alchemy of fantastical and metaphorical character narratives flourish. Conjuring his magical stage of actors from the depths of his mind’s inner image, Denysenko weaves elements of national identity, religion, myth, and legend into a tapestry of unnatural history, suggesting an allegorical chronicle of both weight and whimsy.

Born in Lviv, Ukraine, Oleh Denysenko concentrated in graphics while studying at the National Academy of Printing (Lviv). He holds over thirty international honors for printmaking, including Grand Prize of the 9th Mondial Triennale for Small Prints (2014) in Chamalieres, France. Recent participation in other comprehensive print expositions include the International Triennial of Small Graphic Art, Łódź, Poland, “Global Matrix VI” International Printmaking Exhibition, Purdue University Galleries, and the 10th International Biennial of Modern Printmaking, Trois-Rivières, Quebec. He is an active member of the Union of Ukrainian Artists and the Academic Senate of the International Academy of Modern Art (Rome). Oleh Denysenko lives and works in Lviv.

Celebrating its sixty-third year of activity, Art at the Institute is the visual arts programming division of The Ukrainian Institute of America. Since its establishment in 1955, Art at the Institute organizes projects and exhibitions with the aim of providing post-war and contemporary Ukrainian artists a platform for their creative output, presenting it to the broader public on New York’s Museum Mile. These heritage projects have included numerous exhibitions of traditional and contemporary art, and topical stagings that have become well-received landmark events.

Announcement about the exhibition was featured in: